Contents [ show ]. Categories :. Cancel Save. There are always beings endowed with special power, chosen by the gods to determine the fate of the world.

The Titan Lords were the first, lords of the elements. With their help, the gods created our world. But when their work was done, the Titan Lords turned on each other, and began a war that ravaged the earth. The gods grew angry when they saw what had become of the world, and banished the Titan Lords to the depths of the earth and the sea.

Where they were to remain imprisoned until the end of time. An ancient prophecy says on the day they are freed, the age of destruction will begin. Casting aside the prohibitive density of past games certainly has its upsides — frustration is rarely due to the game's lack of direction — but in the process it seems as though many of Piranha Bytes staple elements were removed, or left untouched when they too should have been updated. Risen 2's skill system, for instance, could use refinement. It's still entirely functional, it's just odd that with the apparent emphasis on user-friendliness such a convoluted system made it into the final game, where the requirements for increasing statistics and unlocking new abilities requires an unnecessarily complex procedure of menu study and where the effects of upgrades are often difficult to notice.

Not all progression paths are equal, either, which ties into the unevenness of the combat. You begin without a set class, and by fighting monsters and completing quests you earn glory that can be directly spent on increasing basic attributes. It's a freeform system of character development, where there's no up-front limitation of how to power up your pirate.

As tends to be the case in Piranha Bytes games, you're incredibly weak at the start, so expect to be humbled by some of the starting area creatures until you get the hang of how the combat works and learn a few abilities. The sword fighting is dull at the beginning, but gains quite a bit of depth after you've learned to kick, use powerful attacks, parry and riposte. When dueling other humans or slashing at sword-carrying sea creatures the system shines, resulting in satisfying timing-based gameplay where you block, deflect and counter-attack incoming slashes.

Against monsters, however, the sword combat system is far less appealing. Creatures sometimes charge, sometimes stupidly wander about in circles while absorbing damage, and in many cases launch into irritating, uninterruptible attack sequences that make toe-to-toe fighting a mess.

Wild swings in difficulty between enemy types mean you'll just as often have to rely on chipping away at health, retreating, saving, then repeating, and often reloading when combat encounters routinely break down because of factors beyond your control. Alternatively, you could learn muskets, which allow you to attack from a distance and have a chance at inflicting huge critical damage. Musket fire is capable of utterly destroying enemies without much thought, making it effective, though monotonous, as it requires no finesse.

Simply point, shoot and win. Pistols are at least slightly more fun because they're an added bonus, an attack that can be periodically mixed into the rhythm of combat to stagger and damage foes, and perfect for dealing the final hit after knocking an enemy backwards with a swift boot to the stomach. If you'd rather ditch the physical weapons and rely on something magical, then Risen 2 will disappoint. 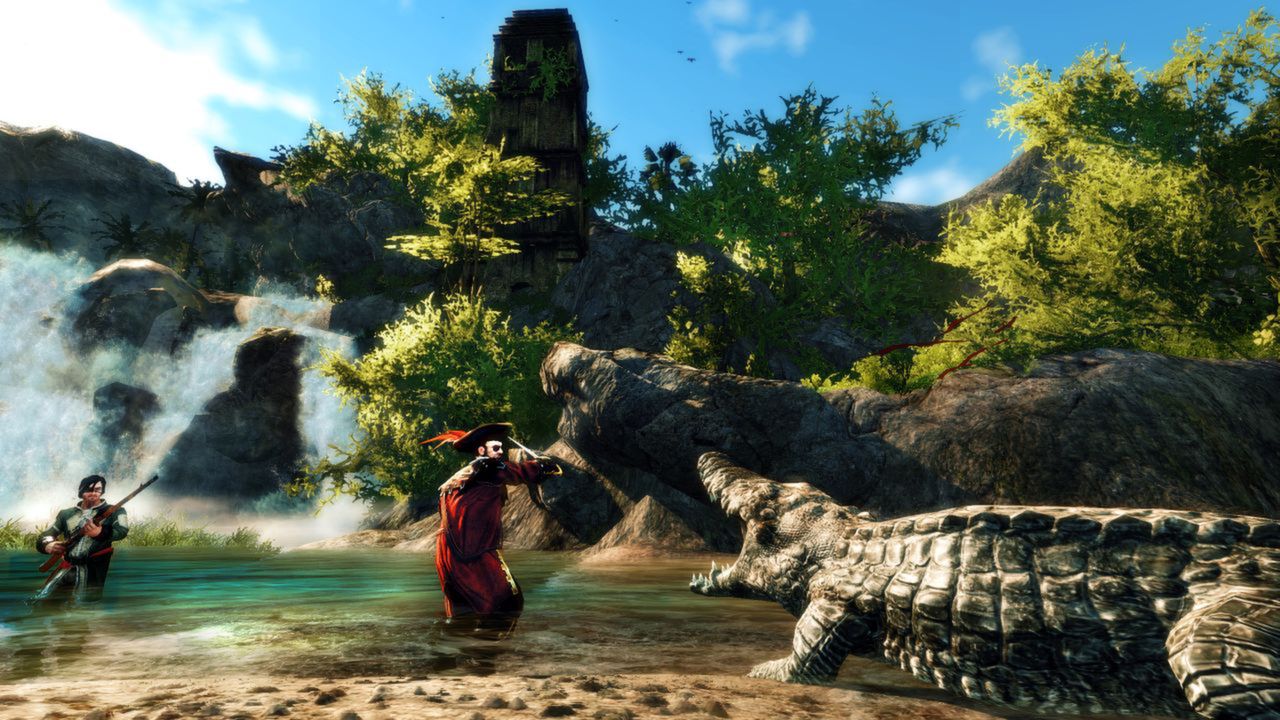 The voodoo system in Dark Waters is more about debuffing and mind control than dealing direct damage, and while its inclusion is novel for the series, the effects of its paltry few abilities barely change from the first time they're learned to the game's end. You'll be able to immobilize targets with fear, summon a ghost, weaken enemies with curses or set two enemies against each other. It only feels useful because it allows you to bypass the sloppy mechanics of up-close sword battles with non-humanoid creatures by causing them to attack each other, or by hanging back while your summoned ghost runs in first to draw their attention.

There was plenty of opportunity to do something interesting by altering the series' magic system, but by implementing so few abilities with so little in the way of progression, Risen 2's version is a letdown.


Outside of combat, some of the skill upgrades factor into conversation, letting you intimidate or flirt your way past the need to fork over large sums of money for information and items. While the results can occasionally be funny, there's not much to the system.

Conversation is generally straightforward, though you'll see some variation on quest goals depending on your skill set. With voodoo skills, for instance, you'll have the option to mind control friendly NPCs and wander around in their bodies, allowing you to either issue orders or access information that would have otherwise been locked out. Occurrences like this are all very much predetermined, though, with predictable results.

Had Piranha Bytes dug deeper into developing systems like this, perhaps the results could have been more surprising and, ultimately, more fun to use. Other NPCs can be recruited to your cause, some with unique powers in battle like healing or strength buffs. They're always worth bringing around, mostly because they can serve as a damage sponge against some of the more annoying enemies, opening a window of opportunity for you to land some free sword strikes or gun shots.


Their usefulness as alternate targets highlights some of the combat system's weaknesses, especially while fighting multiple beasts at once and trying to avoid getting unfairly stun-locked by a fast-attacking panther or firebird. With Risen 2 Piranha Bytes continues to demonstrate skill at crafting big, believable worlds. Dark Waters is at times beautiful, offering a finely detailed set of islands to explore on your quest to become a notorious pirate captain and vanquish an ancient evil. It's Piranha Bytes' most accessible game yet, and though its style and boorish, humorous dialogue fit well with the pirate motif, it's a role-playing experience that uses convention as a crutch and marginalizes or strips away a lot of elements that made the studio's past games stand out.

Disappointing character development options, sloppy combat and run-of-the-mill questing structures often make Dark Waters more of a chore to play than it should be, and exploration isn't nearly exciting enough to make up for its many flaws. If you desperately to role-play as a pirate, you certainly can in Risen 2, but you'll also find little that's memorable, and a multitude of poorly implemented ideas and missed opportunities. The Verdict With Risen 2 Piranha Bytes continues to demonstrate skill at crafting big, believable worlds. PC Xbox PS3. A few humorous characters, and the game's tone and story fit well with the pirate theme.

Voice acting is generally well done, except for a few very obvious exceptions. Sword fighting can be excellent or irritating, depending on the enemy type.